Metaphorically speaking, this strikes me as salient to tomorrow’s decision – it’s not a plea to change your vote, it’s simply a  quick-write personal reflection that jumped out at me with this morning’s reading: 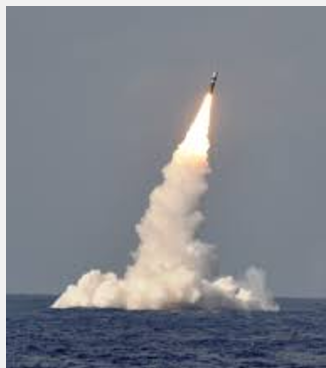 “By 1974, Douglass [James W. Douglass, Catholic theologian, author, and conscientious objector] and his wife Shelley, were living with extended family in Hedley, British Columbia, a remote mining town in the Canadian province’s vast interior. One day, Robert Aldridge, a Lockheed engineer on the design team for the Trident missile, arrived at their doorstep. He told them he had resigned from his job because his conscience was tormenting him.”

Like Aldridge, I know a little something about not tolerating the party line, i.e., default script – and also about my conscience being tormented. Survival for me meant stepping outside that box and proceeding with much fear and trepidation, wrestling to redefine what it was that would inspire and nurture life.

Ironic, perhaps, that this day before election day, I read those words in ‘A Still and Quiet Conscience: The Archbishop Who Challenged a Pope, a President, and a Church’ (John A. McCoy).

The realization that the Trident (a first-strike weapon) would escalate the arms race was daunting, terrifying even – nuclear annihilation was looming.

As a child, I recall that terrifying feeling – and, in a more grown-up way, I’m feeling it deeply today.

One of these two primary candidates is not like the other.

True, I’m not a fan of Hillary Clinton, (my friends and family who are will hopefully still love me), but Donald Trump terrifies me like no other presidential candidate ever has. He’s a hothead with very limited understanding of building relations with heads of state – having him responsible to oversee world-stage politics and potential military actions leaves me feeling sheer terror for the United States – but also the world.

“In January 1975, the Douglas’s and fourteen other Canadians and Americans had founded the Pacific Life Community (PLC), a motley group of radical Christians, Quakers, feminists, and Catholic Workers. A summary of their initial meeting noted that ‘almost the only thing we had in common was our concern with the nuclear arms race and our hopes for peaceful social change. In language that would later be embraced by Hunthausen, they said they also wanted to confront ‘the Trident within’ themselves by rooting out the personal violence in their own lives.”

Truly, we’re all in different places, i.e., a motley group like McCoy mentions above, we all have our interests and passions we’re trying to represent, and these can be perceived to be in conflict with one another. But, we might be able to recognize that the core of each focus is that life is sacred, and to be preserved if at all possible.

My life as an American is not more valuable than any other life on this planet, and so I will make decisions to the best of my ability that considers that perspective.

Oh hey, and just to reaffirm – because it has become so much about this – born and unborn, I believe that life is to be held with compassion and sacredness whenever possible – and also true, I say often that it’s not my call to judge another’s decision, and I stand by that. But when the candidates demonstrated personalities outstrip this one-issue concern to implicate the entire world’s annihilation, which includes the expected fallout from world-stage bullying and even nuclear annihilation, I’m conscience-bound to vote for the one who represents the lesser threat.

May we dig deep to find peace in the midst of difference, and ways to sit well with one another in the coming days.

Disclaimer: This is no way reflects the political views of Choices Mt. Shasta, nor is an endorsement of any political candidate or platform.

a whole lot more to discover

the carnival in my head.
Holy Soup

Challenging the status quo in church with innovative approaches to ministry.

“Keep two pieces of paper in your pockets always. One that says ‘I am a speck of dust.’ The other ‘The world was created for me.'" - Rabbi Bunim

Reflections on the experiences of a celibate, LGBT, Christian couple

(because there's a lot of love out beyond the social straitjackets)

Who I am today is not who I will be tomorrow.

proselytizing the masses through poetry & prose

WordPress.com is the best place for your personal blog or business site.